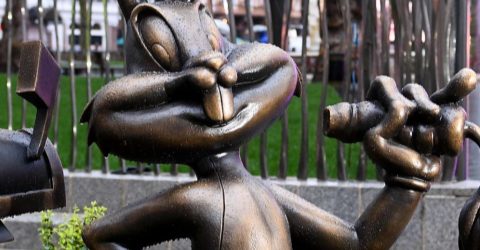 Scenes in the Square…

On Thursday 27 February, The Heart of London unveiled Scenes in the Square, in partnership with Westminster City Council and most major film studios.

Celebrating a century of cinema and Britain’s love of film, Leicester Square has come to life with some of the most iconic characters from our favourite films, from Mary Poppins to Wonder Woman.

The statues in Leicester Square include Laurel & Hardy, Bugs Bunny, Mr. Bean and many more. All of which can be found animated in different parts of the square. Find Paddington sitting on a bench eating his marmalade sandwiches, Wonder Woman bursting through a wall and Batman watching over the square from a rooftop.

The long-term art installation features highly recognisable classic and contemporary film characters, each immortalised in interactive and expressive bronze statues, some brought to life in the evening through lighting.

Scenes in the Square

BACK TO NEWS LISTING

West End Life
To stay up to date with news from the neighbourhood,
follow us on Instagram:
@GASCOYNEHOLDINGS